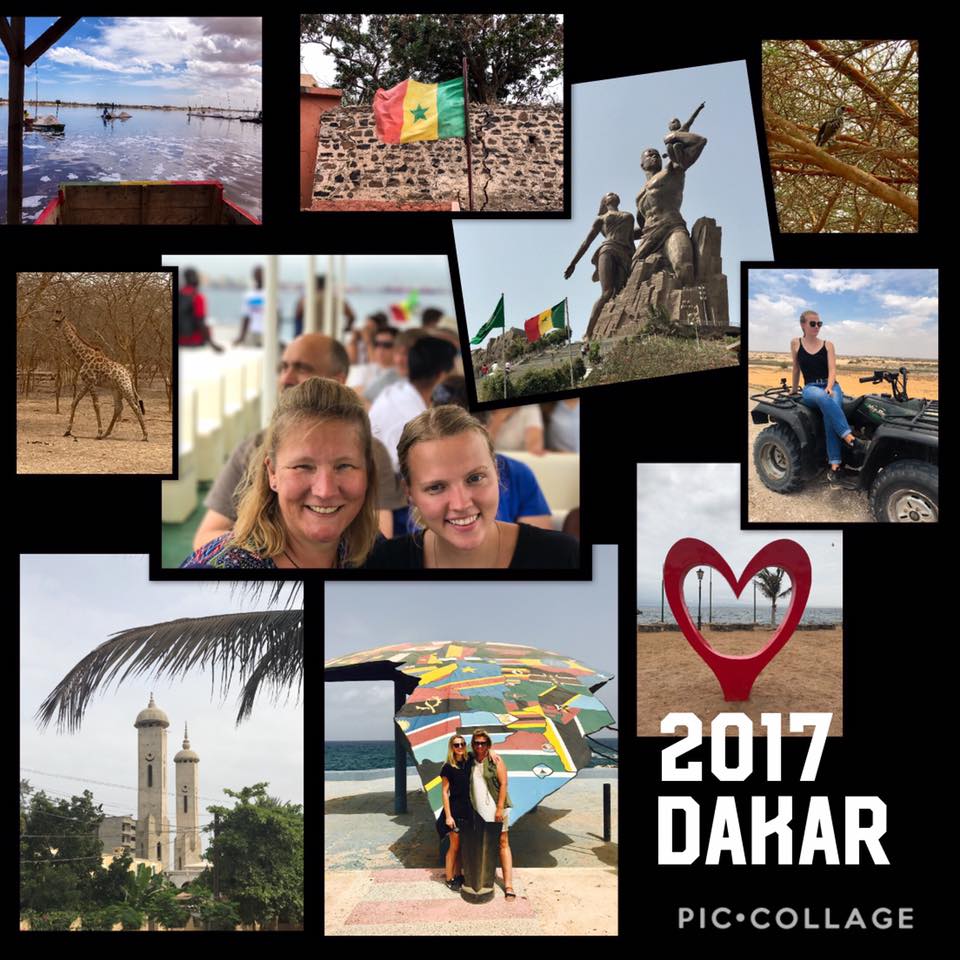 Senegal changed me. Have you ever been on trip that was so humbling and somehow motivational? I place that left you in awe? Those ten days were spiritual. It has been impossible to describe the ways in which the trip affected me.

The recent death of Anthony Bourdain has left me musing about my travel half way around the world. I remember watching the Parts Unknown episode on Dakar a dozen times. Bourdain was quoted as saying, “Even if you’ve been traveling nonstop for 15 years like me, there are places that snap you out of your comfortable worldview, take your assumptions and your prejudices, and turn them upside down.” Yea, what he said.

Our accommodations were near the American Embassy (we were there because my daughter was doing an internship of sorts for her International Politics degree). The streets off the main road were mostly dirt. Goats, cows and dogs laid in the shade with people propped on them like live pillows. There are cars, animals or people everywhere in the city.

The hotel was a bit off the beaten path, caddy-corner from a mosque. It was during Ramadan so there was significant foot traffic. Prayers were broadcasted on a loudspeaker day and night.

The building we stayed in was a three story with a kitchen and eating area on the roof. We were advised we were not to leave alone after dark but if we absolutely needed to, the hotel could provide an escort for us. Mosquito nets wrapped around our beds. The lady that made our breakfasts was friendly and efficient; fruit, pastries, yogurt, coffee and juice was the standard fare. There was an on-your-honor beer/soda fridge.

Traveling to a country where English wasn’t the local’s second language was new to me. In Senegal, Wolof is the main language, French the second and occasionally you’ll run into someone that speaks ‘a little’ English. Each time my daughter and I would go to a restaurant that would be the first thing we’d ask, English, anyone? Human beings are human beings so it wasn’t that difficult to communicate; we all have the same needs. I made it a point to order the local’s favorites and tried things like pickles and olives in a tasty sauce, their version of chicken and rice with onions called Yassa and of course, their green bottled beer, Gazelle. (I sampled a lot of that! Good stuff!)

Our guide, GB, met us each morning and took us to local villages, fisherman beaches, tourist beaches, crowded markets, restaurants, an animal refuge and anywhere else we wanted to go. Because of Ramadan, the restaurants were empty. No one ate during the day. GB wasn’t even tempted by gum or water. They take their fasting very seriously.

We saw people in mass and animals wandering the streets. We traveled on cars and boats, but we saw horses pulling everything from furniture to live goats. The horse drawn wagons were just a part of the normal traffic. Often, those horse cart drivers were young, shoeless boys.

The one thing that stuck me the most about everyone I met was they have so little and were so grateful, happy and content. When I wanted to buy a dress, they brought me bolts of fine fabrics. I began to laugh at the thought of having to sew everything I wore. I met a group of women who were resting/napping in the shade (beyond them, a few camels sought shade under a row of trees). One woman had a newborn baby I fawned over. I held him as long as I could and joked I was going to slip him into my bag and take him home. (He’d be walking by now.) All of the children I met were (beautiful and) well behaved with perfect manners.

Ninety-five percent of the time, we were the only white people. Occasionally, I would see someone taking a picture of me. A tall white woman in shorts just isn’t a thing. In fact, I was told it was amusing to the some of the locals that I was wearing ‘children’s pants’. When they saw my puzzled look, they explained only children would wear short pants above the knee. Most women wore long dresses. I noticed there were two or three main patterns but each was unique. They carry things on their head, lots of things. From their groceries to their laundry, stuff was usually balanced on top of the women’s heads.

The celebration of the end of Ramadan was more holy than any Christmas I’ve experienced. The streets that were crammed with people the day before lay silent; no one around, not one business open. (No cabs or public transportation ran that day either.) It was the only day I was told it was safe for me to wander alone, so I did. I went up into the neighborhood streets, wandered and took pictures for hours. Families were gathering, laughing and enjoying each other’s company. Throngs of people came for the sunset service, so many they spilled onto the dirt streets. Families came dressed in the same cloth, everyone in their finest adorned with smiles. It was the busiest night as kids and women were out in groups.

Once I started reminiscing about this trip, I wrote over a thousand words… Stay tuned for part two, coming soon.