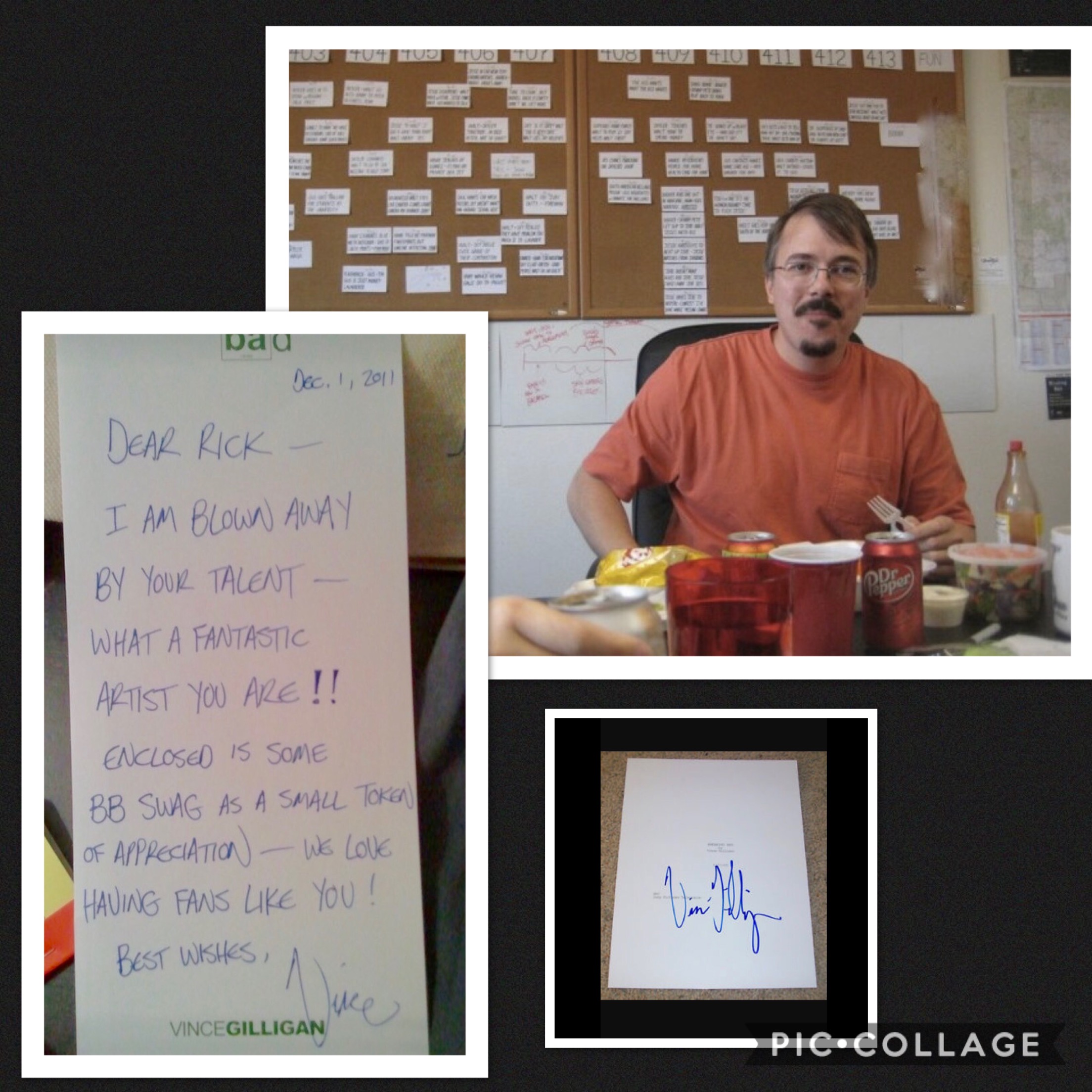 Happy fiftieth birthday to one of my idols and inspirations, Vince Gilligan. Hard to believe he’s only a half century old. His writing has impacted most of us through our adulthood and it’s hard to imagine life without his contributions. Of course, I’m a huge Breaking Bad fan (NM is where I call home), but his writing is more than that iconic series. Vince also wrote for X-files, Lone Gunman and Better Call Saul as well as the movies Hancock and Home Fries. He’s been interested in film and screen writing for years, creating his first sci-fi film on his best friend’s mother’s Super 8 video camera.

The best thing about getting to know celebrities through their handwriting is seeing the human side of them. It was easy to find many samples of Mr. Gilligan’s writing online to evaluate. The first thing I noticed was each signature is a bit different. It’s human nature to for our writing to change with our moods. Handwriting is body language on paper and handwriting analysis is merely analyzing a snapshot of the writer’s disposition at the time of the writing.

Every written correspondence or personal writing of Mr. Gilligan’s seems to be block-or all caps-print. Many people believe all caps printing is for legibility but in reality, it’s a defensive mechanism to avoid letting others get too close. My guess is this is the case for Vince Gilligan. His writing is legible and shows imagination and intelligence but there are indications of a desire for privacy. These things could have been attributed to him being raised by a single mother school teacher. His penmanship shows he has a wall of sorts built around his soul to try and avoid getting hurt emotionally.

Naturally, there can be seen high creativity and the ability to go-with-the-flow, something that I’m sure has served him well in his career.  He shows a need to please and wants to be liked even though he (most likely) wouldn’t admit that. Within his work drive, you can count on him seeing things through to the end, he’s dedicated and loyal.

His signature (his public face) is dynamic, it changes. His initials and the double ll’s in Gilligan seem to be where he divulges his moods the most. The letter V in handwriting analysis is all about decision making. The sharper the bottom the more the writer is able to make snap decisions and stand by them. Vince’s vacillates between being soft and almost sharp. Even with his privacy issues, he likes to talk things out, sleep on decisions and bounce ideas off those he respects or loves. The G in Gilligan has changed throughout time. Since that letter corresponds with attitudes towards money it can be assumed the more money he made, the more responsible he became with it. He has several generosity signs in both his signature and writing and (my guess is) having money has contributed to his ability to be lavish with others.

The double l’s in his signature are like windows in to his mind. His twisted and dark mind. Okay, that may have been a little harsh, but his imagination is “outside of the box” so to speak. And aren’t we all glad it is! The chilling part of his imagination brought us some of our favorite X-file scenes and the fate of all our favorite Breaking Bad characters. Seriously, think about Mulder and Scully and some of their truly ‘out there’ adventures. Who thinks of crazy, twisted stuff like that? Only people that make their l’s like Vince Gilligan. His sharp wit and sense of humor can also be seen in those ll’s.

Other notable traits in his writing show frustration and time restrains common to normal folks as well as huge stars, an ability to live and let live, high levels of forgiveness and passion. In so many ways, he’s just like everyone else, wanting to fit in, questioning his beliefs and trying to remain positive even in the most difficult times.

If I could pick any Hollywood legend and take them to lunch, Vince Gilligan would be my first choice. Seeing his handwriting only established that even further for me. Cheers, Vince! Here’s to many more!

Just for fun: (my favorite Vince Gilligan quote) “I’m pretty much agnostic at this point in my life. But I find atheism just as hard to get my head around as I find fundamental Christianity. Because if there is no such thing as cosmic justice, what is the point of being good?” – Vince Gilligan