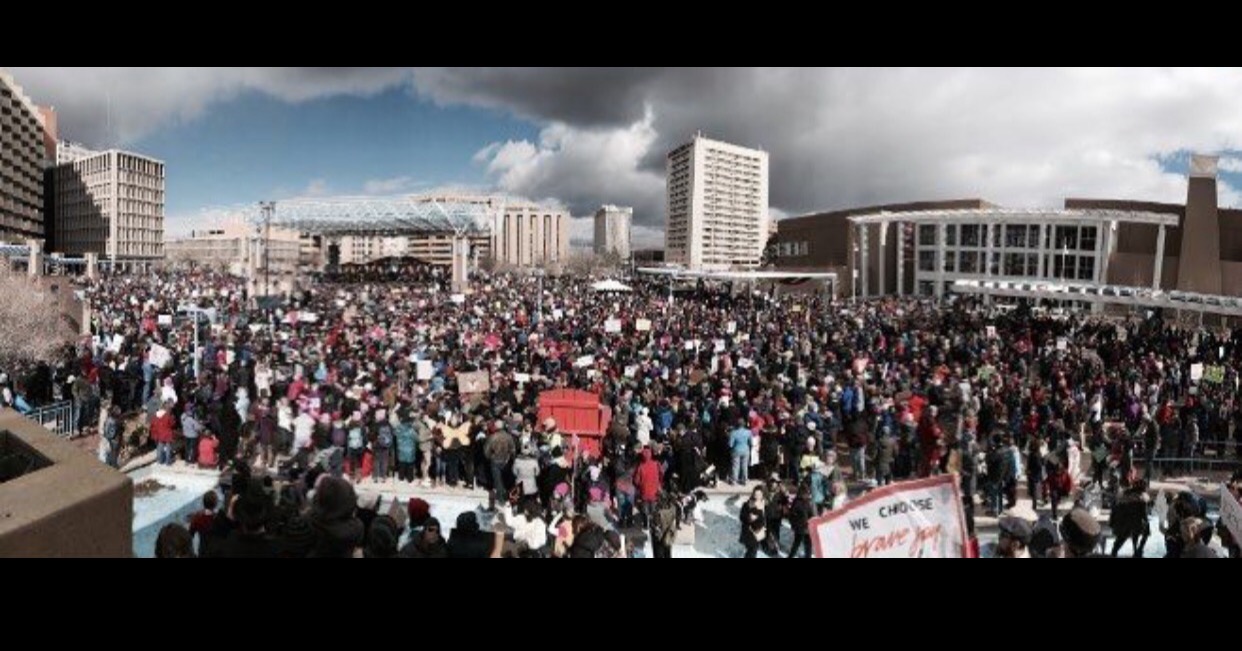 As I got ready to join thousands of women for the Women’s March on Washington I periodically checked in on social media to watch as our numbers grew. Some ladies seemed confused, why are we marching? What do we hope to accomplish? At this point, there is so much. Where do we begin?

One of the first things I noticed upon arriving at the Civic Center in downtown Albuquerque is the diversity of the protests. Of course, the main message; women should have control of their own bodies. They should be able to make the decisions regarding their unborn babies without having to convince a totally stranger of what’s best for them. Dare I say it? … Abortion. An issue that has been in and out of the spotlight more than any other I can remember. Laws have been passed, repealed, passed again. Isn’t it enough already? It’s 2017, shouldn’t we be able to trust that women of every walk of life know what’s best for their individual situation? Which brings me to the next outrage.

Rape and sexual assault. Here’s another way women don’t have equal footing in the world. It’s acceptable, excusable and almost expected in many situations. Why though? Seems barbaric to me that we teach our girls how they can or can’t dress, speak and act instead of teaching our boys to keep their hands to themselves. Wouldn’t that be easier, just teach boys/men it isn’t okay to grope, grab or force themselves on women? Time and time again I’ve heard, ‘boys will be boys’. C’mon, really? Let’s be the change in this conversation. It’s time.

That brings me to the next point of our march today. Equal pay for equal work. Again, I’m appalled knowing many of my women friends don’t get paid the same for the (often superior) work they do. They are overlooked for promotions due to their gender, and the fact they may become a mother one day. It just doesn’t seem right in a country as wealthy and forward thinking as America women don’t get compensated the same as their male-counterparts.

Speaking of this progressive (ish) way of thinking, LGBTQ rights were represented in the march today. As if who we choose to love affects anyone other than the person we’re loving. As if it inconveniences folks that a couple can be more than the traditional man/woman. Another discrimination that is completely baffling to me. Maybe the world knows there’s enough people and being a homosexual is the way to correct the overpopulation problem this planet is experiencing… just a thought.

Climate change, immigration reform, bullies and corporations buying our government and its officials were also a part of the protest. The direction this country is headed is frightening. If you’re not at least a little scared/nervous, I hate to say it, but you’re not paying attention. Read. Fact check. Do your homework. Let’s avoid history repeating itself, please.

There are many, many, many reasons to come together today and celebrate the diversity of us as women, us as human beings. There are many reasons to want to protest, to have a voice, to be heard. In the words of a great man named Bernie Sanders, “Black, White, Latino, Native American, and Asian American, gay or straight, male or female, native born or immigrant we will fight bigotry and create a new government based on love and compassion, not hatred and divisiveness.

March on sisters… March on! #womensmarchonWashington #2017