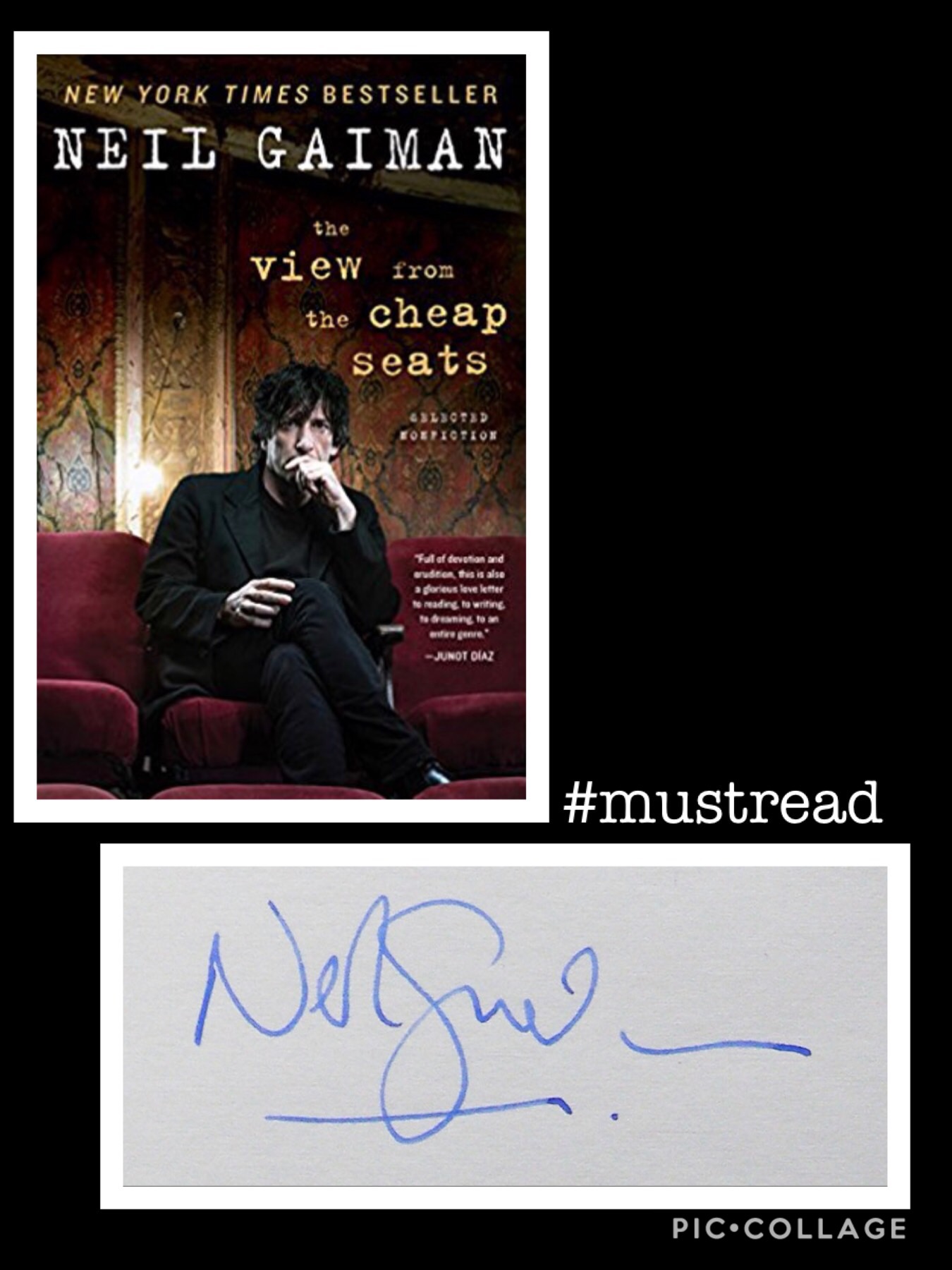 I hope one day I’m famous enough to be introduced by Neil Gaiman. (He’s really good at introducing people!) I’ve been a fan of his work for years, but none of them affected me quite like The View from the Cheap Seats. This is a great read for readers but an absolute MUST READ for authors.

Here’s a couple things I’ve learned I have in common with Mr. Gaiman

1. We’re both Scorpios!
2. I also suck at gardening, but I love it. I do it anyway. It’s good for the soul to grow something from seed to food. We do it every day in everything we do… If your foods (or relationships) are sour or bitter perhaps you should look had how you tend your garden (life).

3. We both use ACX for our audio books.

1. FINALLY! Thank you, sir for explaining what genre is and how it works for me, the author who bucks all genre type lines. I’m not and probably never will be a ‘genre writer’ but if some publishing house wants to label me ‘fiction/chick-lit/real life on paper writer’ and pay me to do what I love, I’m a-ok with it. Now I know about genre, it’s not really for the writer at all. it’s for the reader. (I’m almost embarrassed this had to be lined out for me in such simple terms. Thank you.)
2. The hardest thing I learned from this book, (and I’m embarrassed to say, I’ve played this six seconds over and over) is, “If you, as a parent, raise your children well, they won’t need you anymore. If you did it properly, they go away.” My daughter is on the brink of getting her Masters in Europe. She’s also in love with a young man from Germany. She’s excited to start her adult life with him. The places they are applying for jobs are literally thousands of miles from my home. Thank you, for letting me know I did my job well. (sniff)

The bottom line is, Neil Gaiman is a fantastic story teller. I listened to this book on audio and backed up the parts I liked and listed over and over. I enjoy his voice and cadence as he goes. Although I’ve never met Stephen King, I honestly thought Neil’s impersonation was Mr. King! It was fantastic and I listened to it again after he apologized for the impersonation, it was spot on. I imagine the Lou Reed one was as well. Bravo!

As promised, here’s a little handwriting analysis… Fortunately for me, there are a TON of samples of Neil Gaiman’s writing on-line. Neil’s writing is what we call ‘print-write’, a combination of printing and cursive. The overall look is typical of the Roman style penmanship he was most likely taught in a British school opposed to the Palmer method us American’s are taught. In perfect British fashion, he craves efficiency (and there is a bit of quirkiness about him).

He has a great ego and is comfortable in his own skin. There is a professional drive that shows he knows he’s still learning, he’s humble. (and not religious)
Socially, he’s private but genuinely likes other humans. He remains leery when he first meets people and even after all these years, he’s still an introvert at heart. If you are one of the lucky few who get close to Mr. Gaiman, you’ll be friends for life. (He’s loyal.) As far as money goes, he’s not the best at budgeting and his monetary fault is he is too generous. He would literally give you the shirt off his back if he felt you needed it more than he did.

Neil Gaiman likes an intelligent debate but avoids confrontation at all costs. He’s a firm believer in the statement “Growing old is mandatory; growing up is optional.”
On several samples, I saw foot pain. I thought it may have been an old injury so I had a friend send me a picture of an autograph she has in a book and the foot pain wasn’t there. Keep in mind, handwriting is a snapshot of one’s self at the moment it was written. My guess is, there was a time he had a foot injury/pain and that’s why it showed up several times on-line but was healed or not bothering him the day he signed my friend’s book. Overall, his writing is healthy and intelligent with a deep sense of caring/empathy and a deep sense of humor.