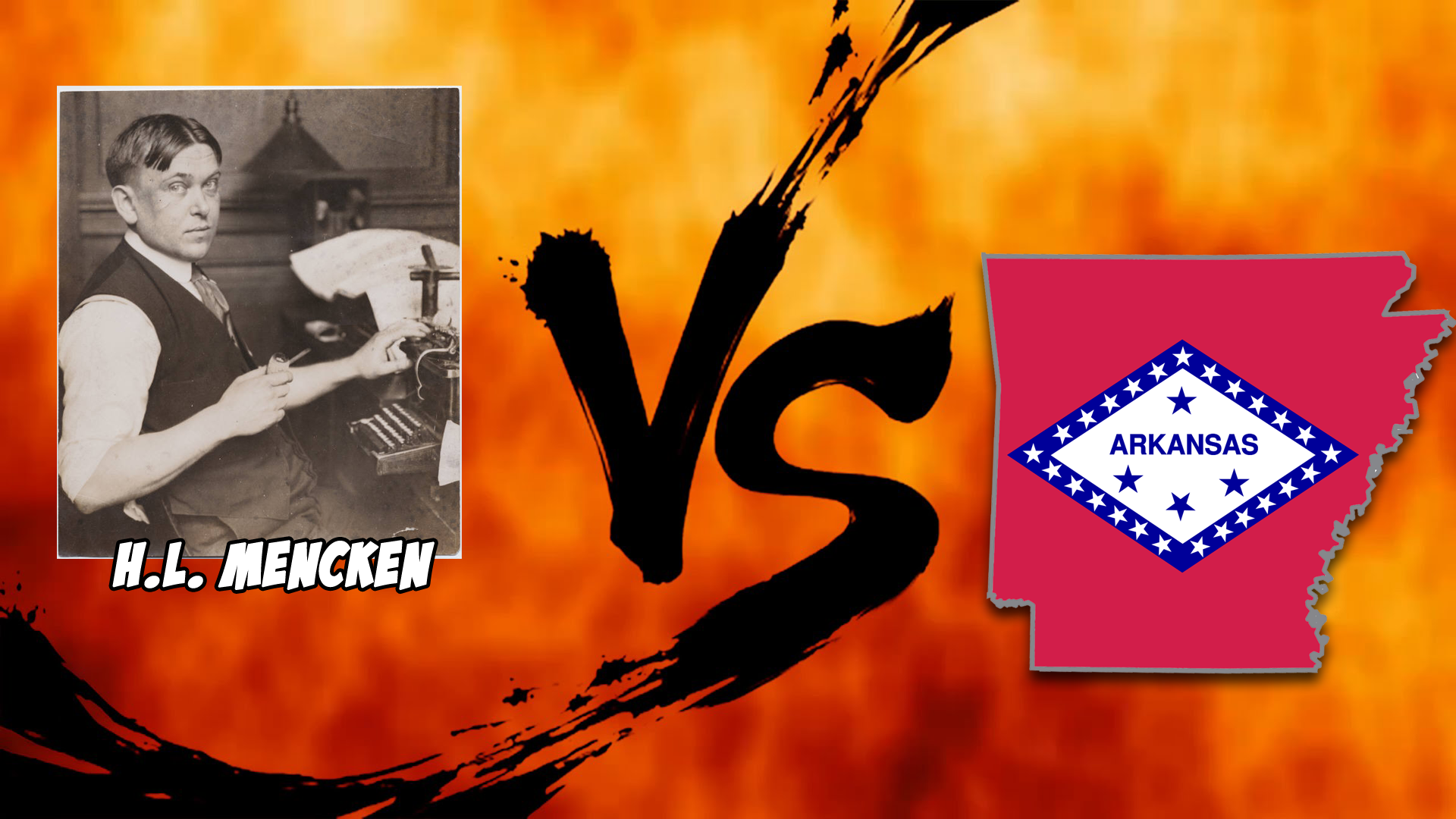 Today (Feb 3rd) in the year 1931 the Arkansas state legislature passed motion to “pray for soul of HL Mencken” after he called the state the “apex of moronia” among other things.

HL Mencken wrote for the Evening Sun in the 1930’s. Around that time he wrote 3 columns about the state of Arkansas. Here are a few choice exerpts:

“No state offers better picking for evangelists. It has a full outfit of anti-evolution laws and other such products of the camp-meeting, and, though moonshining is widespread, there is heavy majority for Prohibition. The enlightened minority is a minority indeed, and it is confined to a few towns.”

“Several years ago I enjoyed the somewhat depressing pleasure of making a tour of the country lying along the border between Arkansas and Oklahoma. I can only say that I came out of it feeling like a man emerging from a region devastated by war. Such shabby and flea-bitten villages I had never seen before, or such dreadful people. Some of the former were so barbaric that they didn’t even have regular streets; the houses, such as they were, were plumped down anywhere, and at any angle. As for the inhabitants, it is a sober fact that I saw women by the roadside with their children between their knees, picking lice like mother monkeys in the zoo.”

“The fields were bare and the woods were half burned. There were few fences. When one appeared, usually far gone in decay, there was always a sign on it, painted crudely with the backward: “Prepare To Meet Thy God.”

“It is a Christian act, of course, to save Americans from starvation. But it would be an even better Christian act, I believe, to try to civilize them. You may be sure, however, that no American statesman will propose it. It would cost too many votes in 1932.”

This level of unvarnished truth was of course met with fierce condemnation by politicians and religious leaders of the time. One of them was former governor Charles H. Brough who responded about a month later. This was a time before television when long thoughtful editorial was published and read widely.

Mencken did not retreat – “Let Dr. Brough,” he wrote, “as a sociologist, find out why so many of its (Arkansas’) farmers are miserable, exploited, chronically half-starved share-croppers, without reserves and without hope. . . And let him prepare himself for this labor by pasting in his hat the following . . . from the Little Rock Democrat of Feb. 8:

Yes folks, HL Mencken was a literal bad ass… maybe the Jon Stewart of the 1930’s. The Arkansas state legislature finally lost it when Mencken referred to the state as “the Apex of Moronia”. Insulted but to indict or jail him for any crime they passed a motion to “Pray for the soul of H. L. Mencken”.

But Mencken’s writings made many wonder if he believed he actually had a soul. Here are a few more great Mencken quotes – remember this guy was in his prime in the 1930’s. This was a time when it was almost unheard of to be openly atheist.

“We are here and it is now. Further than that, all human knowledge is moonshine.”

“We must respect the other fellow’s religion, but only in the sense and to the extent that we respect his theory that his wife is beautiful and his children smart.”

“I am suspicious of all the things that the average people believes.”

“Faith may be defined briefly as an illogical belief in the occurrence of the improbable.”

“Moral certainty is always a sign of cultural inferiority. The more uncivilized the man, the surer he is that he knows precisely what is right and what is wrong. All human progress, even in morals, has been the work of men who have doubted the current moral values, not of men who have whooped them up and tried to enforce them. The truly civilized man is always skeptical and tolerant.”

“The older I grow, the more I distrust the familiar doctrine that age brings wisdom.”

“A cynic is a man who, when he smells flowers, looks around for a coffin.”

“If, after I depart this vale, you ever remember me and have thought to please my ghost, forgive some sinner and wink your eye at some homely girl.”