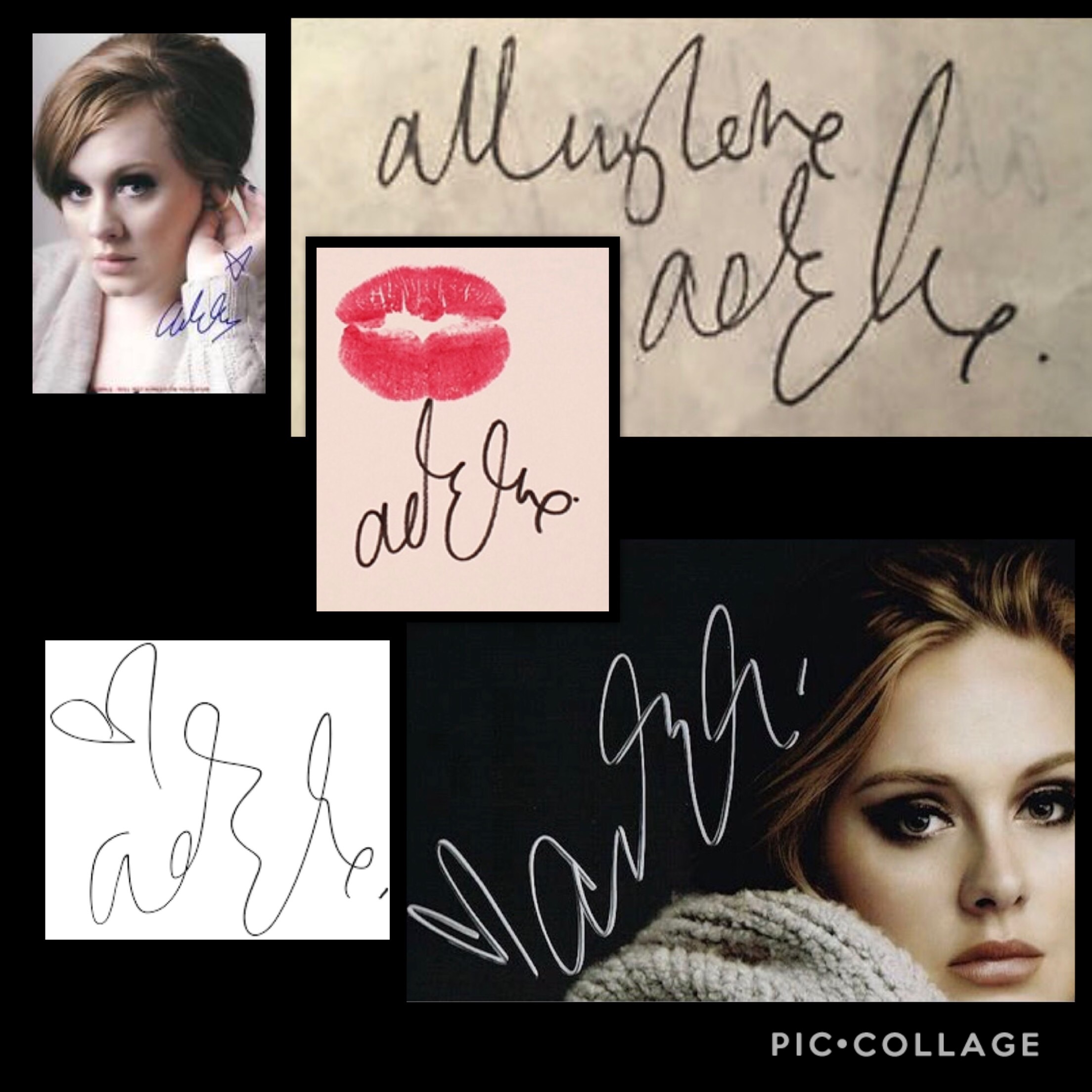 My celebrity happy birthday handwriting analysis goes out to a British treasure, Adele. A lot of wonderful musicians that have shaped our lives have come from across the pond, Adele is no exception. Born 5/5/88 Adele Laurie Blue Adkins, her young, single mother raised her alone. Adele always knew what she wanted to be when she grew up and wrote her first hit at the age of 16. She has broken records in the music industry, specifically for women. She was the first woman in history to have three simultaneous top ten hits on the iconic Billboard top 100. Her long list of awards includes six Grammys, album of the year, artist of the year not to mention, VH1 and Time magazine’s accolades touting her as one of the most influential women in the world.

There were some things about her handwriting that surprised me, in fact, when I first found her signature on-line I thought it had to be a fake, but further research showed it was the right one. There are only a few things handwriting analysis doesn’t show and one of those things is age.  Of course, there are people who are young, young at heart and then those who are mentally impaired or lack education. These are indications of how old the writer might be, but are not solid clues for age guessing.

With Adele’s signature, she shows education and intelligence, young at heart but with an old soul. I was shocked to learn she’s only twenty-nine today. Her writing shows a tendency to serve others first, a ‘what can I do for you’ suggestion. There is a sense of calmness graced with confidence. With as big as superstar as she is, I totally expected to see her writing laced with ego-but no. She’s down to earth and real. Optimistic and (mostly) happy she’s creative, spontaneous and chatty. And she wants you to like her. (Who doesn’t, right?)

When you look at her signature, it’s almost illegible. This could be because she signs so much and has gotten a bit sloppy but it can also mean she has some privacy issues going on. I love the fact she puts a period after her signature, it’s the only real ego shown in her writing. (I am who I am, period.) She’s hard on herself and has a high ‘bar’ set within her profession and personal life, but she will never apologize for who she is (like it or lump it). Tenacious, she won’t quit (a bit like a bulldog, don’t piss her off, there’s a bit of a temper simmering just under the surface-especially if you mess with her family-mess with her all you want, but don’t even think of going after her loved ones).

There is also a nice balance between tradition and new ideas. I love this about Adele’s signature. She honors tradition yet knows she must roll with the times to stay on top. (Smart.) The other balance in her penmanship is with money. She’s generous but not. To put it another way, she must believe in what she’s donating to, it must be a passion for her or she will decline giving money or time. There’s a hint of ‘me first’ in the finance category of her handwriting.

I specifically picked signatures with hearts on them. Many female stars sign this way. Adele’s hearts are often one line (she doesn’t lift the pen).  There can be seen crosses and hooks within them telling us she’s ‘once bitten; twice shy’ when it comes to love and relationships.

Of course, I love Adele’s music, it’s amazing. Today, since I’ve peeked into her personal world with her penmanship, I’ve fallen in love with who she is. I’ve discovered a genuinely nice person who is a riot to be with, a young woman with a fantastic sense of humor, wit and passion. Happy Birthday, Adele. If there is anything left you want to do while you’re still in your twenties, you better get on it! Looking forward to the next several decades of your amazing music making!

I wanted to be a singer forever. But it’s not really my cup of tea. Having the whole world know who you are.

Be brave and fearless to know that even if you do make a wrong decision, you’re making it for a good reason.