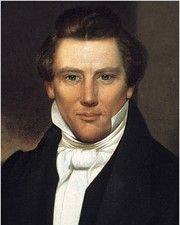 The surface level story is something to the effect that some unfaithful people who didn’t like Joseph because of his religion pulled him out and beat him up.

But some sources suggest that Joseph was targeted by the angry family of a young girl he was “intimate” with. The reports differ as to what her age was some say 12 some say 16, whatever the case it’s an interesting story.

I was reading a thread from 2012 here discussing it: http://www.mormondialogue.org/topic/57996-why-was-joseph-smith-really-tarred-and-feathered/ and you’ll notice there are a variety of opinions. Some people are obviously against the church and several are for it.

One other interesting thing that popped up in the thread was the claim that Joseph Smith did not in fact support polygamy. A commenter points to this website: and if you read the “Who We Are” section they are obviously strong believers in the church looking to protect those beliefs. This is a particuarly obvious falsehood especially when you read the long list of wives Smith had: https://en.wikipedia.org/wiki/List_of_Joseph_Smith’s_wives

I don’t claim to be a historian for the church but these types of anecdotes are many. There are many people beginning to dig into the actual history around things and find that the account from “prophets” and church leaders are wildly inaccurate.