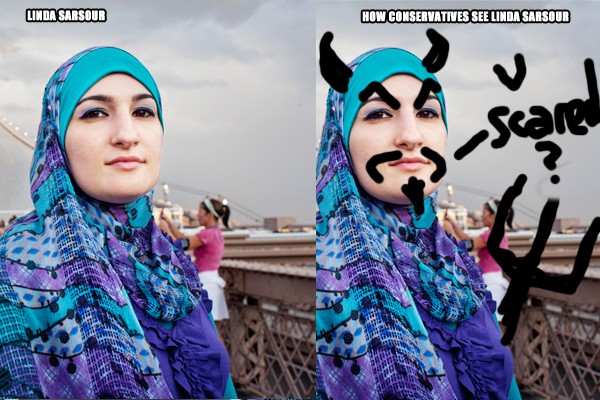 Linda Sarsour is a Palestinian-American activist and executive director of the Arab American Association of New York. There are 2 words in that sentence that instantly make conservatives lose control of their bowels – “arab” and “palestinian.”

I’m writing this because Linda Sarsour helped to orchestrate the 2017 Women’s March which was a huge success. As a result of this success she is now being defamed by conservative media. What are they saying? Oh the typical “she’s a terrorist – crap your pants America” line they always use. What’s great about it this time though is the evidence they’re using – some incriminating tweets! Let’s take a look at them shall we?

Sarsour is a Muslim advocate no doubt. She has fought for the freedom of religion and at times has advocated for Muslim’s rights to practice Sharia in the U.S. – To be clear, she’s not advocating that it become the law of the land, which is what conservatives are saying. She is fighting for equal rights of Muslim’s to be able to practice Sharia if they see fit. In the same way that Judaism or Christianity is free to practice their culture’s religious traditions among their believers.

The extreme right wing blog “The Gateway Pundit” posted this article about Sarsour’s ties to “Hamas terrorists” (spooky!) and her “support of Sharia law” (GASP!!) – So let’s examine these scary tweets. They obviously have this conservative pundit very scared and upset…

This first example pretty much lays it all out there right? “If you are still paying interest than Sharia Law hasn’t taken over America. #justsaying” – that’s obviously blatant support for Sharia Law – or a sarcastic joke that’s poking fun at people who are dumb enough to believe Sharia Law is actually a problem in the United States.

This though is perhaps the most damning evidence of all – “Interest free?” “Sounds nice doesn’t it?” She just said Sharia Law “SOUNDS NICE DOESN’T IT!”

As if to show directly how sad and scared they are, Gateway Pundit also uses this as an example of why Sarsour is an extremist: 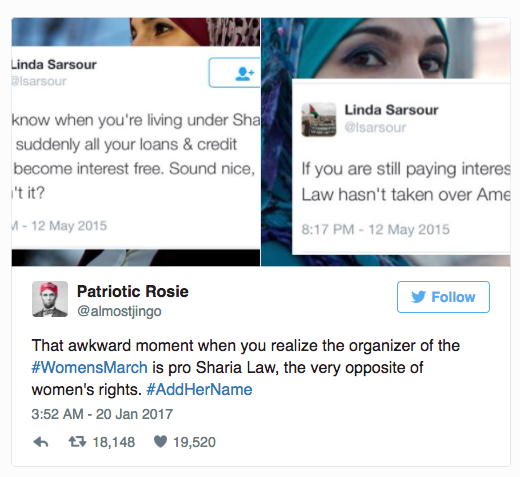 As if to show that the American right has no understanding for anything that requires nuance or reading comprehension… “Patriotic Rosie” here calls out Sarsour as being a hypocrite for supporting women’s rights and Sharia law simultaneously. I’m sure Patriotic Rosie is an expert on Sharia and knows that elements of it actually already practiced in the UK and *gasp* Israel. The only country that follows it to the letter is Saudi Arabia – a U.S. ally.

Better to live in fear as a scared pathetic tool of racists and xenophobes than to educate yourself on the reality of the world around you.

In closing, if you “believe” that Linda Sarsour is an extremist who is trying to push Sharia Law on America you are either willfully stupid or a liar.