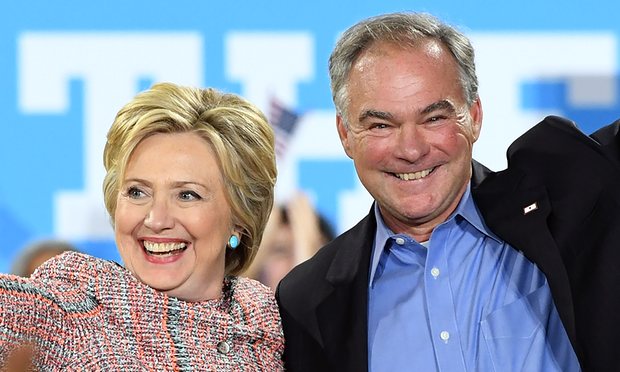 Only in Hollywood does the underdog come back and win the Presidential election. Tears streamed down my face the day after Senator Sanders lost the primaries. Literally, I cried into my morning coffee. As my sadness stopped, I realized what he accomplished by making it to the Presidential ‘final round’. America is waking up. Awareness is key.

Let’s face it, the President is a figure head. We all saw how difficult the Republicans made President Obama’s job. They figuratively ‘tied his hands’ on many policies he tried to get through, voting down one good idea after another. The same will happen with Hillary. Throw in the misogyny attitudes towards the fact she’s female… My guess is she’ll have more challenges and road blocks than ever.

This is also why it makes sense for Hillary to choose Tim Kaine. If the Clinton campaign wins Kaine be replaced by a Democratic (due to a Democrat governor-other options had a Republican governor giving that state a potential Republican replacement.) This will keep their numbers strong. Leaving Bernie Sanders and Elizabeth Warren where they are makes more sense in a bigger overall picture of law and policy creation. They are leaders in the Senate. The Democrats need to take control of the House of Representatives. Again, it’s a bigger picture than the title POTUS. There’s more to it than the figure-head. The Democratic party needs to play the long game too. Tim Kaine could also make a great candidate for the next presidency when Hillary’s run is over. Here’s why.

He’s young. From everything I can find, he seems ‘center-left’ which is where this country should be. He’s genuine. He’s not obnoxious. He’s for the Latino community. He’s not for the NRA. He believes in global warming and knows the urgency of it. He’s against No Child Left Behind and high-stakes testing. He’s sincere. He’s positive and upbeat. He’s not a hawk. He’s against war. He’s for cutting subsidies to big oil. He’s for cutting interest on student loans. He’s smart. He’s for allowing the Bush tax cuts for the wealthy expire. He’s not orange. He’s funny. And there doesn’t seem to be any ‘skeletons’ in his preverbal closet. (Refreshing. And he made President Obama’s short list for possible VP nominees.)

After doing little more research I’ve discovered the low-key senator of Virginia and I have the same stance on women’s rights. Although Catholic he’s pro-choice. I won’t hold his religion against him but my stance is the same. I wouldn’t have an abortion. That was my personal decision to make. I think each woman should have that choice, period, end of story. Senator Kaine has been quoted as saying the same thing, it’s the woman’s choice and he is certainly all for keeping government out of those personal decisions, upholding Roe v Wade.

Naturally, we don’t agree on everything but there isn’t a candidate that I agree with on every stance. He’s for the TPP, I’m not. But I agree with Clinton and Kaine on more than I don’t. I’m old enough to remember the George W Bush Jr. fiasco with the third party candidate Ralph Nader. We can’t let that happen again. United we stand. I think even Bernie would agree with me, the Democratic ticket is the only logical choice this election. (And that’s why I’m voting for Hillary.)