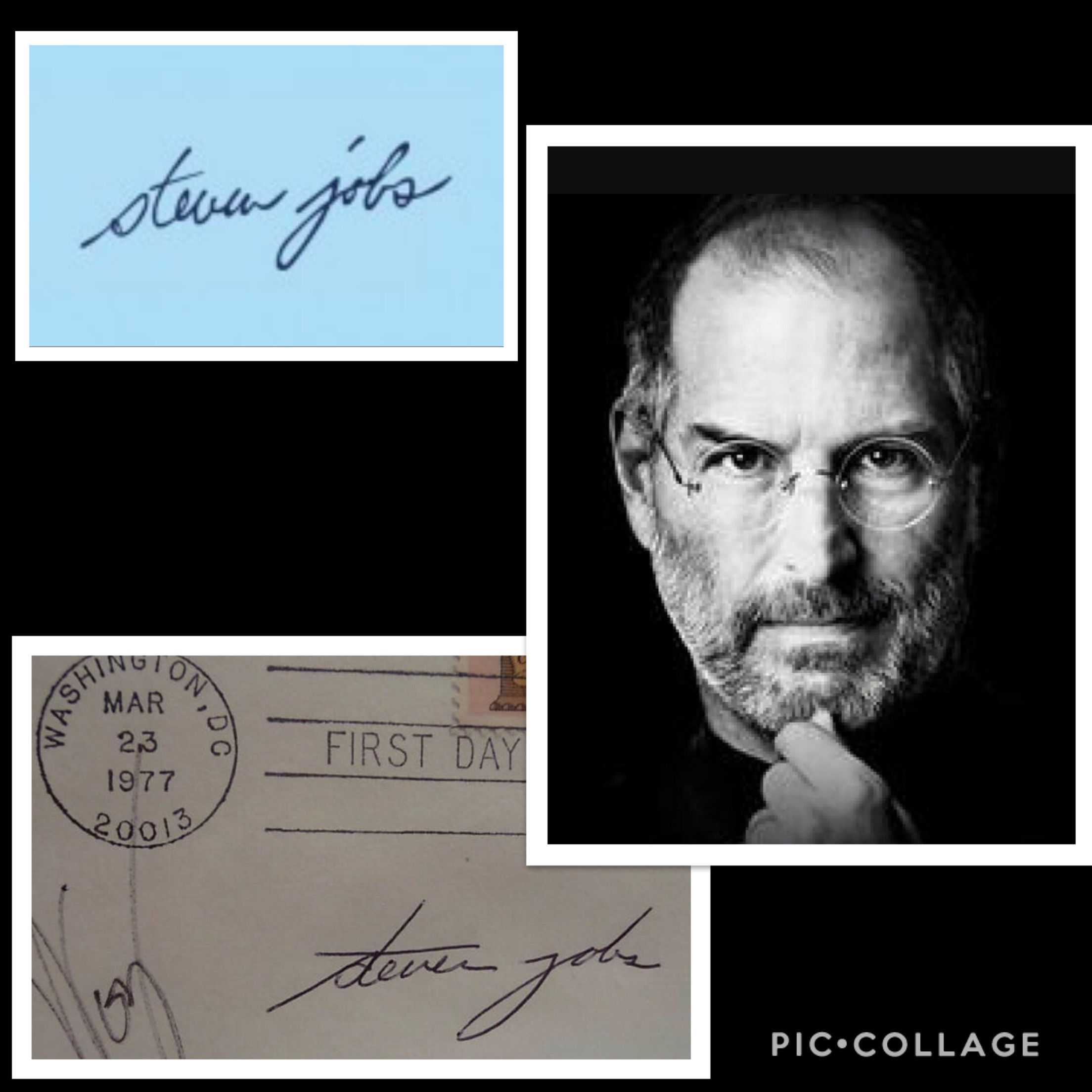 Steve Jobs changed the world in which we live. This is true whether you use Apple or not. Happy birthday to this genius who would have been 62 today (February 24) had he not died of cancer in October, 2011. He was adopted at birth by a second set of parent’s when his birth mother’s first choice couple backed out. Stating simply ‘they wanted a girl’. His dad (Paul Jobs) had grown-up with an abusive father and vowed to never treat Steven the way he was and subsequently, indulged him. Although his parents adored him even though the first few years were difficult, his mother (Clara Jobs) was afraid to get too attached to him. There were court battles regarding custody for the first six months of his life. Raised in Northern California during the sixties, he was one to have explored many of the extra-curricular activities that area was known for. Brave, Steve Jobs knew how to push the boundaries of his environment. Let’s look at his signature and see what else we can discover about this brilliant man.

Steve Jobs’ signature is plain and legible. There are no embellishments, this shows intelligence and a desire to be understood. If you’ve seen the movie of his life or read the biography, you may have discovered this mastermind wasn’t always the easiest person to get along with. Computers may have been his forte, but people were not. When we look at his signature, there are tell-tell signs this was case. Communication was often off-the-cuff, harsh and blatant, something he stated he regretted at times.

His writing looks a lot like the way we’re taught in school, the slant, size and formation of the letters. This may indicate a person who likes to be in control, someone who likes to ‘call the shots’. On the opposite side of that coin, there is a humbleness about him. This oxymoron in his writing is very endearing.

Steve’s writing has a heavier than average pressure indicating a passion for everything he did. (good and bad) There are also signs of hot-headedness and a temper. In the earlier signature (the one with the post mark) you can see the powerful and long t cross showing his immense work drive, a want to get-things-done-in-a-timely-manner and desire for status. He often would strive for perfectionism which, at times, would let him down when he himself (or others) fell short.

Another consistent indication in Mr. Jobs writing is stubbornness. This may have played a part in his early death as he refused modern cancer treatment for almost a year stating he would be able to cure his own illness though diet and meditation. It surely contributed to his estranged relationship with his oldest daughter (Lisa) during her childhood as well as her mother. In his professional world, the obstinate attitude put a strain on his long-time business partner and friend, Steve Wozniak. There are also indications he liked to play ‘devil’s advocate’ and may have enjoyed arguing for the sake of a good debate. Traditional and innovative (another endearing oxymoron) his writing shows a desire for more responsibility.

It’s also interesting there are pain indicators at the bottom of his j in both signatures. He loved to be barefooted even though it may have been uncomfortable. (or maybe he was uncomfortable in shoes)

So, was Steve Jobs a genius or a jerk? According to his handwriting and signature, a little of both. Guy Kawasaki, a former Apple employee once said, “Most mere mortals cannot understand a person like Steven Jobs. He is the greatest CEO in the history of man. He’s just go a different operating system.” In my opinion, that sums up his penmanship as well.

Being the richest man in the cemetery doesn’t matter to me. Going to bed at night saying we’ve done something wonderful, that’s what matters to me.

Innovation distinguishes between a leader and a follower.

The only way to do great work is to love what you do.

Be a yardstick of quality. Some people aren’t used to an environment where excellence is expected.

I want to put a ding in the universe.