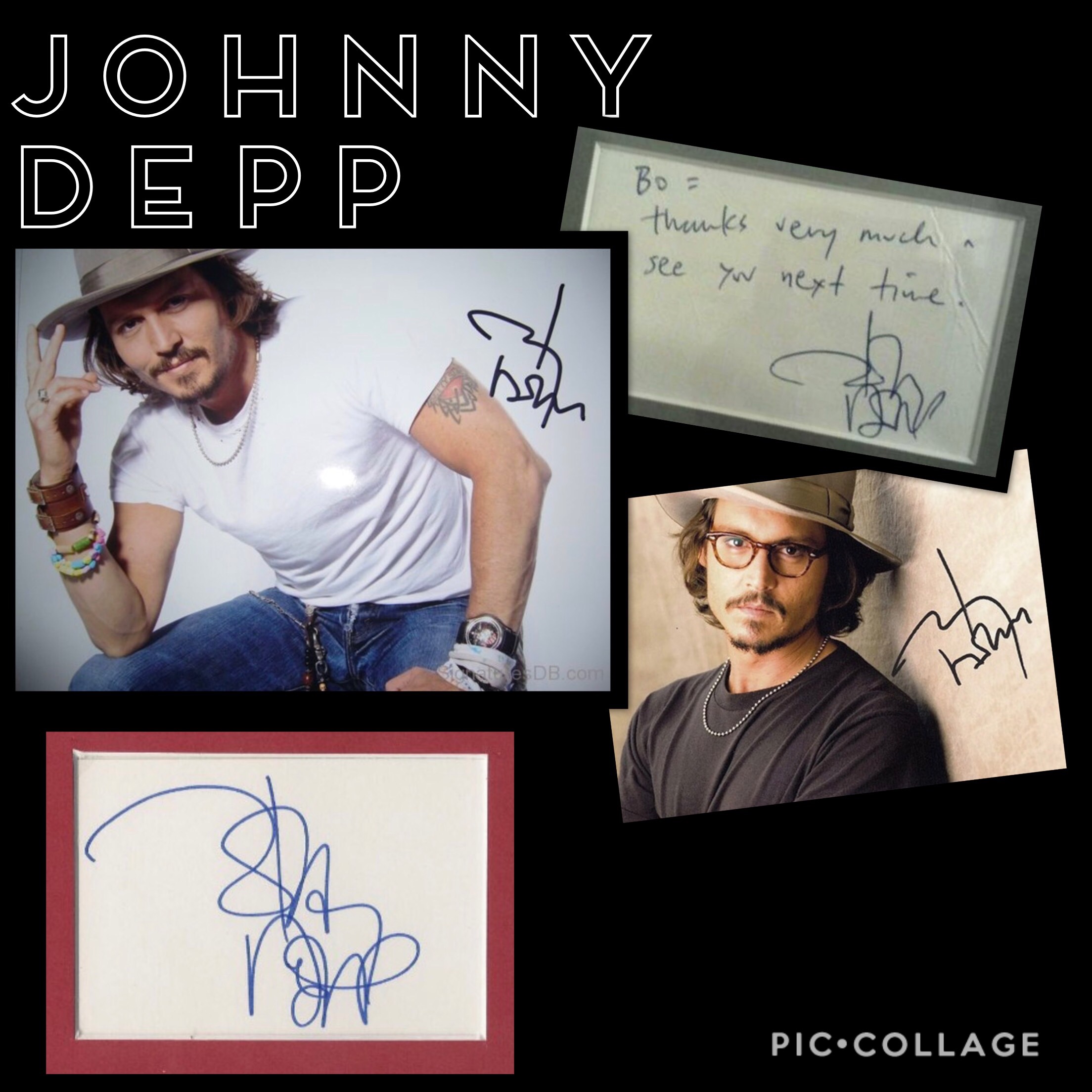 For years, we’ve all been entertained by the amazing, yet humble and oh-so-hot Johnny Depp. Happy birthday to this legend! Back in the mid-80’s his then wife, was a make-up artist in Hollywood and introduced Johnny to Nicholas Cage who encouraged Johnny to seek out an acting career. With that endorsement, Johnny to tried-out and got the role of Glen Lantz in Nightmare on Elm Street (did you even remember that was him?) This launched his career in film and the rest is history. 21 Jump Street, Tim Burton/Edward Scissorhands, What’s Eating Gilbert Grape, etc…

When you look at his signature, you think he must be joking, and in a way, he is. His signature shows he’s able to laugh at himself even though there is some personal pain shown. (In fact, there are indications of self-harm, or ‘cutting’ in some of the writing I looked at.) The autograph is illegible and quick, like his mind. The word Neurotic comes to mind when I look at his writing. This term isn’t usually used in a psychological sense anymore, but it fits Mr. Depp. Nervous, with compulsive actions, obsessive thoughts and a lot of stress is all seen in his penmanship. He holds a grudge, so don’t piss him off, (just sayin’).

The good news… He’s private yet friendly. There are suggestions that even though he’s in his fifties, he still likes to ‘tie one on’ and party is not a foreign word to him. Chatty, when the mood strikes him, he can start a conversation with just about anyone. Johnny is a deep thinker and may even self-title himself a philosopher. He doesn’t watch his own movies even though they have made him a household name, for him, it’s all in a days’ work. He’s not concerned with time even though he values every minute. He jokes he doesn’t need love, but it’s really what his heart craves. He wants to be a better actor, father and person. Even though he’s probably fine at all of those things, he feels there is room for improvement in all aspects of his life.

The J and D initials are the bear and the dog. These traits imbue his personality. The bear needs his down-time and to be left alone so he may better serve those in his life. He’s a better actor when he has the opportunity to just ‘chill out’ by himself. Like a bear, he’s docile unless provoked but once provoked, he can be downright scary. The dog in his last name shows loyalty and friendliness. Plus, his bark is worse than his bite. There is an indication he is still concerned what others think of him and always wants to put his best foot forward. One would think once you rise to stardom like he has he may have the attitude of like-me-or-lump-it, but Johnny Depp genuinely wants people to approve and like him.

I am doing things that are true to me. The only thing I have a problem with is being labeled.
I think the thing to do is enjoy the ride while you’re on it.
Me, I’m dishonest, and you can always trust a dishonest man to be dishonest. Honestly, it’s the honest ones you have to watch out for.

I pretty much try to stay in a constant state of confusion just because of the expression it leaves on my face.
With any part you play, there is a certain amount of yourself in it. There has to be, otherwise it’s just not acting. It’s lying.
There’s a drive in me that won’t allow me to do certain things that are easy.