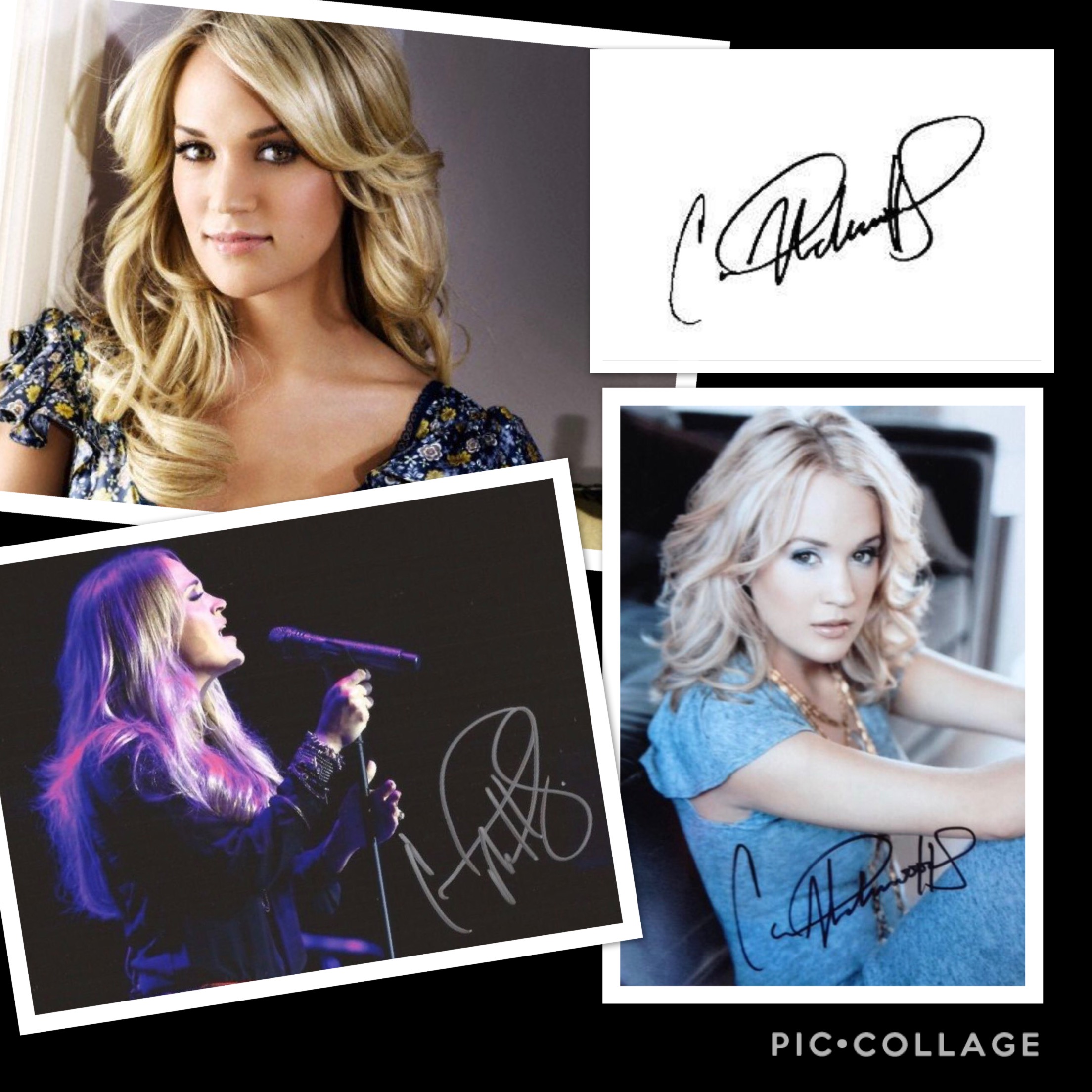 Ever since I watched the movie, God Bless America, I’ve sworn off reality shows. However, in 2005, I was swept up in the fourth season of American Idol like the rest of the country. Carrie Underwood was the obvious choice and I cried along with her when she was announced the winner. It’s been lovely to watch this all-American girl rise to become an iconic figure in the Country Western music world. Watching her succeed and be successful, rise to super-stardom, fall in love and become a mother gives us all the sensation dreams do come true. She’s a class act with humble roots who loves animals and has a true-to-herself style. (Author to author…) Check out her book-folio, Carrie Underwood, Some Hearts. (Reader to reader…) She loves Stephen King!

When we look at her autograph, we can see the changes money and fame did to this wonderful woman as well as the traditional background she was raised with. The C is the letter of femininity, hers has a sharp edge to it. Perhaps she’s been burned by a woman or has ‘walls’ built around her in regards to girlfriends or female co-workers. This has not changed over the years. It’s been in her personality since before fame. She’s optimist and in general, happy.

The animal that coordinates with the letter C is the White Buffalo. Carrie’s C is all it imbues, quiet confidence, a-subtle-storm-not-to-be-messed-with plus pride of her heritage and family. The rest of her first name is basically a squiggle and a loop. The signature of her first name shows she’s private (and was before she became famous), has a great compassion for others and the ability to listen. She forgives but doesn’t forget, fool me once, shame on you, fool me twice, shame on me.

The Underwood part of her autograph shows she’s determined, may worry what others think of her, and is highly protective of her family, (a trait in common with Michael Jackson) I love the way she is resolute in what she wants, for example, being vegan and Christian.  Regardless of her religion and eating habits, she remains open-minded and is equally ready to teach as to become the student. Traditional and polite, her writing shows manners and respect. My guess is, she may have been a border-line introvert before she took the spotlight. Money has changed her core values very little. Since she is naturally caring, she views her wealth as a tool to make life better for her and those she loves.

Cheers Mrs. Underwood-Fisher! Enjoy your special day with family and everything that makes your heart sing!

Sometimes that mountain you’ve been climbing is just a grain of sand, and what you’ve been up there searching for forever, is in your hands. When you figure out love is all that matters after all it sure makes everything else seem so small.

I am grateful for every scar, some pages turned, some bridges burned, but there were lessons learned.