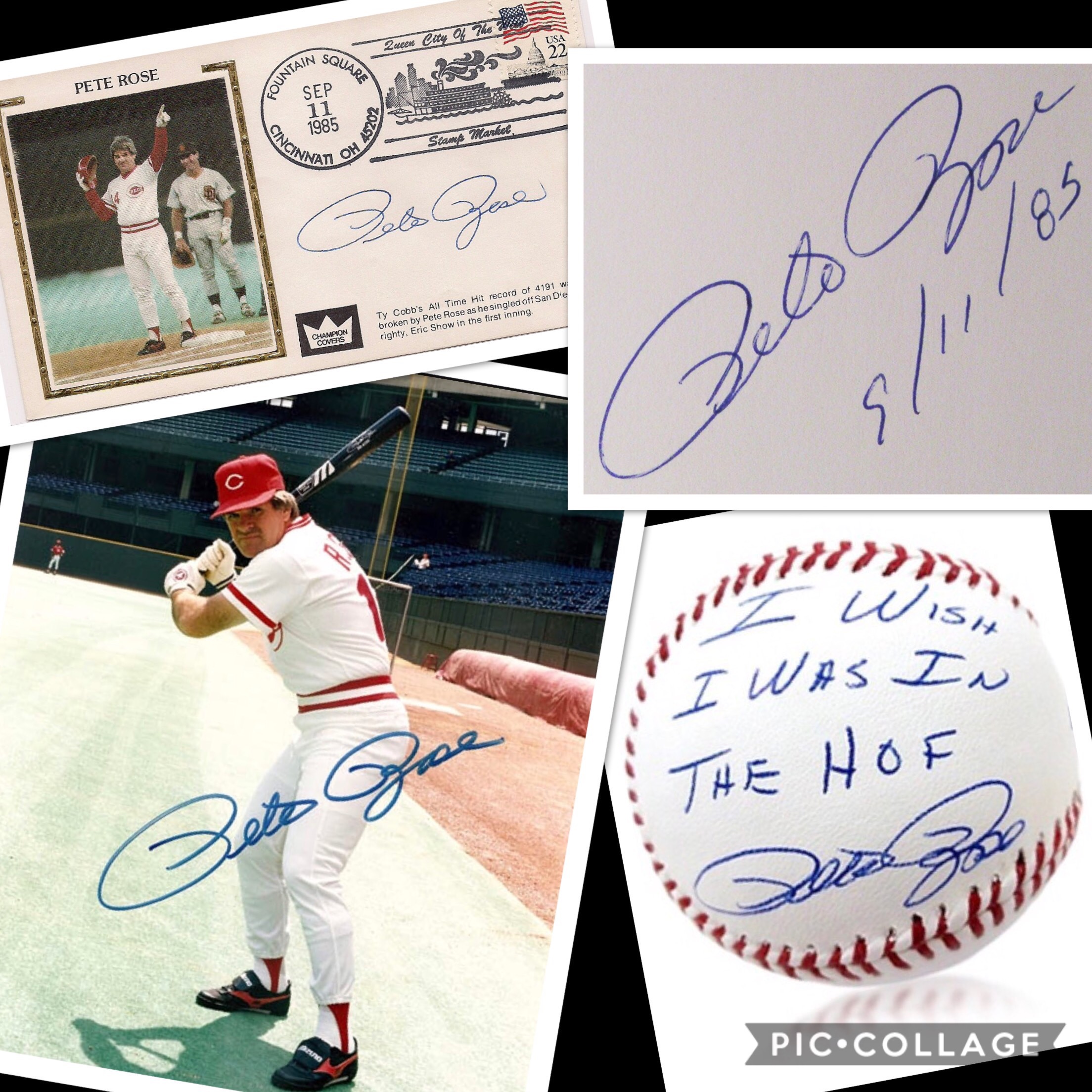 It’s baseball season so Pete Rose is the perfect happy birthday celebrity handwriting analysis for this week. Known as “Charlie Hustle” or “The Hit King”, Pete became famous for an outstanding 4,256 hits within his career. A man familiar with the science behind handwriting analysis, Mr. Rose was banned from baseball due to a forensic document examiner testifying it was his handwriting on betting slips in 1989. Although he claims he never wagered against his team, it was argued that he was betting ten thousand dollars a game … But I’m getting ahead of myself.

Pete was born April 14, 1941 to Harry and LaVerne Rose. Harry’s nick name was ‘big Pete’ and it seemed a fitting name for his son since he had never liked his own birth name. Born the second child of four, Pete’s father pushed him in to sports by way of example. Harry loved football and Pete picked up on the drive, ambition and inclination for sports but Pete’s talent was in baseball. The family never took a summer vacation since that was the baseball season. Harry did not think it fair to the team if ‘one of their best players’ took a vacation. Pete learned right off the bat (pun intended) to hit both right and left handed and would switch depending on the pitcher. He often cited his dad for pushing him to be great in his field.

Within his autograph, you can see his grandiose ego, vanity and bad taste. There are also signs of prejudice, and a few dishonesty signs, specifically, dishonesty by omission (this is further confirmed over his tax trouble for evasion and not reporting all of his income.) Violence can also be seen in some of his handwriting, hot-headed temper and the potential to lash out. He’s an all caps printer which shows his detachment from those around him, he’s emotionally unavailable and has high privacy issues.  There are also indications that he is selfish and self-preserving. When his own daughter said he wasn’t a good father, his reply was, “Of course I am, I just bought my daughter a car.” Within relationships, money buys happiness and loyalty.

Mr. Rose was banned from baseball after he was accused of betting for the team he was coaching, a practice forbidden to key personnel. It was a handwriting expert that testified it was indeed Pete Rose’s handwriting on the smudged gambling tickets. Naturally, Mr. Rose’s attorneys attacked the credentials of the handwriting expert, but the judge upheld the testimony and it was the damning piece of evidence.

During the most recent election, Donald Trump tweeted a picture of a baseball that Pete Rose wrote “Mr. Trump, make America great again” and signed it. Naturally, this was taken as an endorsement but when asked about it, Pete stated that if he’s getting paid to sign a ball, he writes what the customer wants and there was no support towards the current president. (btw, he charges between $40 and $75 for these signatures…)

Personal note… I must admit, this analysis really disappointed me. Pete Rose is quite a jerk and his handwriting proved it. I love baseball have respect for a man who played the game well but as a person, I lost a lot of respect just by researching his signature. See you next week.