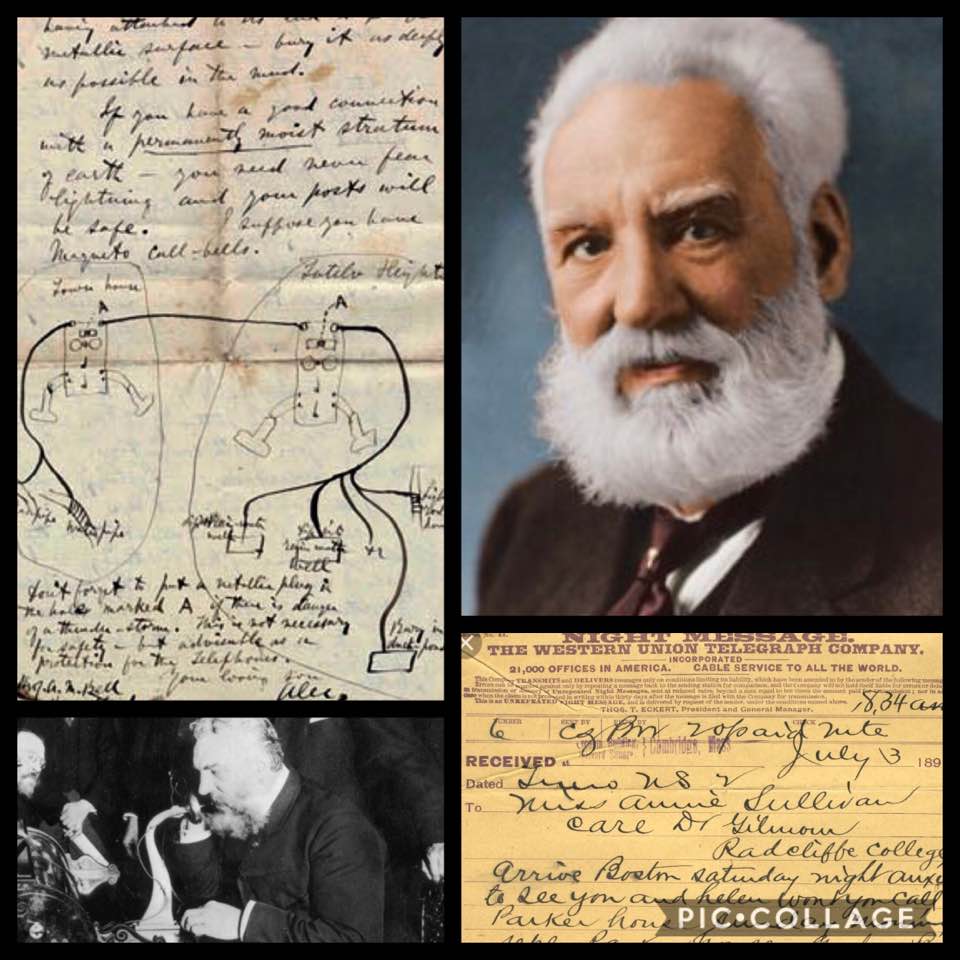 Happy birthday Alexander Graham Bell, known as Aleck to his family and A.G. Bell to his business associates. Born in Scotland, this innovative scientist moved to Canada and eventually settled in Massachusetts when he married a deaf student of his and became a naturalized citizen of the U.S.  Most likely, you’re reading this from your cell phone without giving the evolution of the device much thought. The history of the phone has the makings of a five-star dramatic story; competition, court battles, successes and failures.

Mr. Bell’s mother gradually lost her hearing when he was an adolescence. He became obsessed with continuing to be able to communicate with her and began to study acoustics and the transmission of sound waves. This lead to the patent of the first phone system. There was a race to the U.S. Patent office between A.G Bell and his competitor, Elisha Gray who filed for a similar patent the very same day.

When we look at Alexander Graham Bell’s handwriting we can see the competitive drive he had, the intelligence and the will to succeed. Like the phone, handwriting has evolved over the years to accommodate the times. Back then, cursive writing specifically, was used for cognitive and psychological development (reading, writing and arithmetic) and was a sign of education and intellect.

Alexander Graham Bell’s writing reveals he did indeed have intelligence, vision, drive and compassion for his fellow human beings. He was empathetic and compassionate and genuinely liked people. His penmanship was common for that era, with sweeping cursive and a calligraphy comparison.

Like the phone, there is an evolution of writing too. The capital letter ‘A’ for example. Alexander Bell wrote his as we were all taught in school, big and round like the lower case ‘a’ but larger (being dubbed the Easter egg A). This indicates a person who wants to serve others. It’s been called ‘the housewife A’ as people who write their initials this way are often more concerned with the comforts of others over themselves. In recent years, as the general public has grown more selfish and egotistical, and printing has replaced cursive, we are seeing more and more star shaped A’s. Keep in mind, there is no right or wrong way to write a letter, but varying degrees of the nature it imbues. Alexander was definitely a person who lived to serve others with his inventions and studies.

His writing also shows the long and heavy crosses above his t’s indicating a powerful work drive and desire for status. Alexander Bell’s writing shows a tendency for lively debates (or arguments, lol), the ability to make a decision without consulting others, acumen and an inclination towards tradition and routine. He was an analytical thinker and may have had a propensity to work alone.

Thank goodness for visionaries. “Necessity is the mother of invention” could have been Alexander Graham Bell’s motto as if it weren’t for his hearing-impaired parents we may never have the handheld devices we rely so heavily on. His genius contributions also played a part in the development of the photophone, solar technology, metal detector, hydrofoils, eugenics and aeronautics.  Happy Birthday to this iconic man!

The day will come when the man at the telephone will be able to see the distant person to whom he is speaking. (1906)

The inventor is a man who looks around upon the world and is not contented with things as they are. He wants to improve whatever he sees, he wants to benefit the world; he is haunted by an idea. The spirit of invention possesses him, seeking materialization.

Every town or city has a vast expanse of roof exposed to the sun. There is no reason why we should not use the roofs of our houses to install solar apparatus to catch and store the heat received from the sun.

Coal and oil are… strictly limited in quantity. We can take coal out of a mine but we can never put it back. (1917)

Self-education is a lifelong affair.