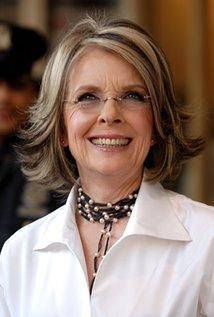 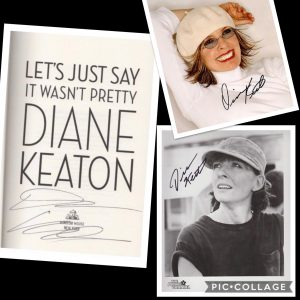 Happy 71st birthday to Diane Keaton, an actress that’s been around as long as I can remember. Her role of Kay-Adams Corleone in The Godfather in 1972 launched her long standing career. She’s starred in almost fifty films and more than a dozen television series. Her most recent big screen project was the voice of Jenny in the 2016 animated movie, Finding Dory. An author of two books as well as a contributing blogger for the Huffington Post. She’s a model and a photographer. Her love affair track record includes Woody Allen, Warren Beatty and Al Pacino. At the age of fifty, after the death of her father, she embraced motherhood and adopted a child. Five years later, she adopted another. She’s against plastic surgery and all for the restoration of historical buildings specifically in the Los Angeles area.

According to her handwriting she has the personality traits to back all of the above.

To find authenticated autographs of hers, I turned to eBay. (each said they come with a COA-certificate of authenticity-so we’ve got to believe they’re genuine, right?)

The three I found all showcases her sense of humor and generosity. She is able to think on her feet and change directions quickly if need be. The letter D is the letter of sensitivity and in her earlier signature, there is more of a concern over what others will think. As she matures and becomes more confident in her career, her D closes indicating a woman who is not so worried about criticism or judgement. (this is common with anyone, not just actors/actresses)

Diane’s IQ seems to be higher than average, she’s personable and friendly yet private. Her circle of true friends is probably small, almost intimate. She’s a self-starter and confident in her looks and sex appeal.

In the three signatures I looked at, the K in Keaton changed, the earlier two looking more like a K and the latter one the K looks like a squiggly line that could be an N or M. One thing that I’ve been asked at least a dozen times is “why does my signature become less legible the older I get?” The answer is, as we age, the majority of us worry less about what others will think of us. Diane’s examples show this if you look chronologically. When we’re younger, we want to impress people, we want people to know who we are and what we stand for. Our signatures are legible. As we age we care less about impressing others. We know who we are and our values, personality, and idiosyncrasies are set. This shows in the breakdown of the legibility of our autographs as Diane’s does in these examples.

Although overall, Diane is an remarkable individual, there are indications of a temper that simmers just under the surface of her cool exterior. (Like most people) She likes to get her way. Those that work with her most likely know their limits and don’t push too hard.

It was a pleasure to get to know this iconic woman through her handwriting. Happy Birthday! Here’s to many more!