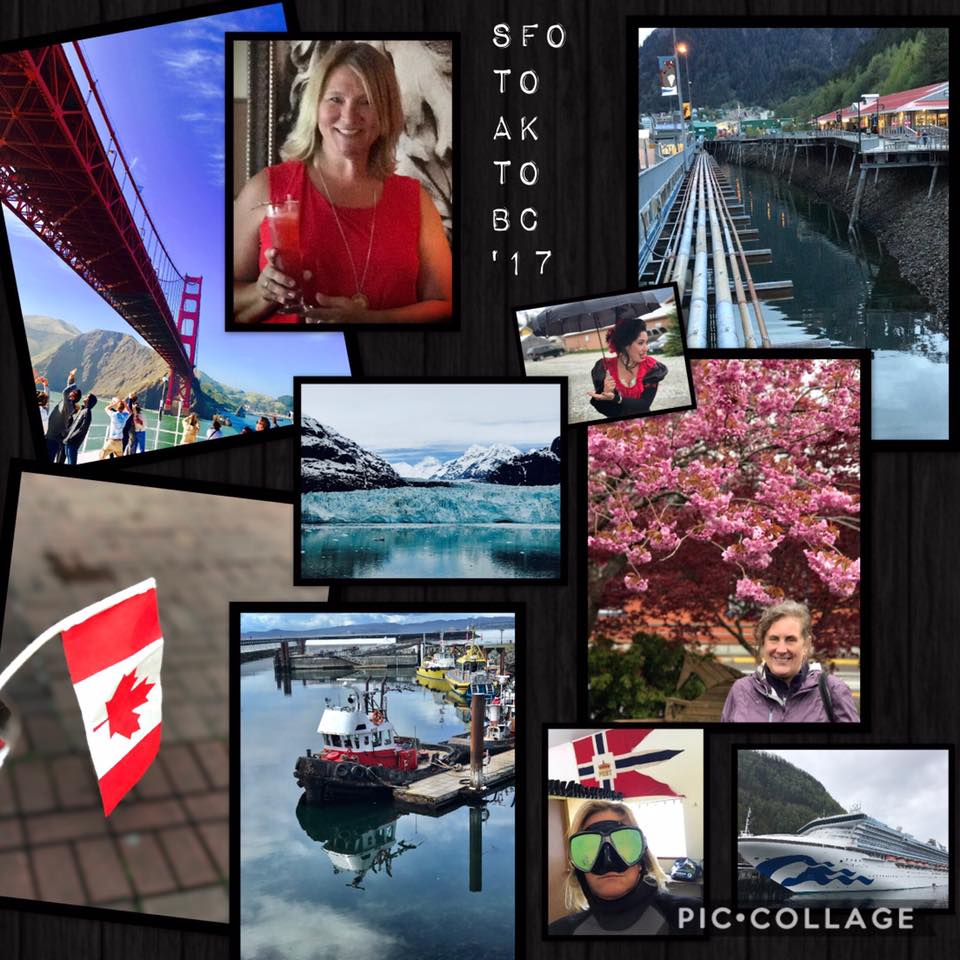 Recently I found a scrap of paper that was a bucket list I had written in 2010. Surprisingly, I’d done most of the things I had dreamed of only seven years ago. The one that still couldn’t be crossed off was “Take an Alaskan Cruise”. Ironically, my uncles and cousins invited me to join them on the Grand Princess’s first 2017 Alaskan voyage shortly after my discovery of the unfinished list. The price ran a little over $2,000 and included unlimited food and beverages for ten days. I told them, “I’m in.” It seemed a little expensive, but room, food, transportation; it all adds up and $200 a day seemed doable. I quickly registered with the cruise line, booked my off-shore excursions and packed my bags.

The first impression as we sailed from San Francisco was the ship seemed to want to ‘fleece’ money from me every day.  Between the spa, art gallery, on-board shops, cheesy pictures, wine tasting, craft time, internet connection*, etc. They wanted more and more money. Even a thorough tour of the ship was over a hundred dollars (I passed on that even though I was very curious). I sucked it up financially and justified it as spoiling myself. (*the internet was SO expensive and super slow, the tower computers left-overs from the late nineties.) They also pushed booking the off-shore excursions at every opportunity.

The first stop was Juneau where I had signed up to go ‘gold panning’ with a salmon bake. The guide dressed the part and was very knowledgeable about the area. (Did you know, Juneau was voted the ugliest state capital in the country?) Anyway… We got to the river and he passed out the pans of dirt and showed us how to swish the water around and get the gold out. I learned the term ‘pay dirt’ came from gold panning and it wasn’t the little flecks the miners were after, but those flecks promised more from the hills and identified where they should start mining. Every person on the tour found gold. We all rushed to stake our claim and find more. But NO ONE found any more. I thought maybe we were doing it wrong or needed to dig deeper. The guide confessed to me he had gotten the original dirt from about six miles up the river where there was known mines that had been successful and still operational. I felt a little gipped. Our driver then took us to where the salmon bake was going on. It was a huge picnic area where a team of cooks prepared the salmon, beans, salads and blueberry cake dessert. It felt, ‘commercial’, buffet style. We were herded through the line, ate and then shuttled back to the ship. (Buffet or not, the food was magnificent, and up to that point, the best meal of the trip.)

Next stop was Skagway where I had signed up for river rafting through the eagle preserve and a ‘ghost and goodtime girls’ tour. There were no rapids on the river although it was relatively fast moving. We saw a few eagles, but no other wild life. The tour guide explained we were still a bit early for the animals. A nice lunch was provided when we were done floating down stream and the information on the Tlingit tribe was incredibly educational. The Ghosts and Good Time-Girl tour was also educational and horrifying at the same time. The gold rush wasn’t easy for anyone, especially the women.

During this time, I was (confidentially) informed that the cruise line was getting part of the money I had spent on the tours. Really?!? Oh yes, the person continued to tell me most of the souvenir shops were also owned by the cruise line and the majority of the money spent went to them.  As I walked back to the ship, I started paying a bit more attention to the shops and stores. It was obvious which were locally owned. I’m big about keeping my money local and was disheartened to learn the residents weren’t getting my cash.

Glacier bay was beautiful. More on that in part two of this blog.

Ketichan was the same as the first two ports. We went restaurant to restaurant trying to find one where it wasn’t a chain or owned by the cruise lines. As we entered the shops, our first question was “Are you locally owned?” Approximately, one in seven were. Since I felt the cruise was getting more and more pricey, I hesitated to spend any more money with the shops that weren’t bonafide locally owned. I did not want to put more money in the pockets of Princess.

Our last port was Victoria, Canada. The stop I had been looking forward to the most. I was confused though why we spent 6-9 hours at each of the other Alaskan stops but in Victoria we only had four hours. Then it became obvious. There were no cruise owned shops and restaurants. Victoria didn’t rely on the commerce from the cruise goers and since Princess wasn’t making additional money on that stop, we were hustled in and out. Such a disappointment.

Victoria was the one place I would consider re-visiting. It was an amazing city! I rented a rickshaw and kicked back indulging in the recreational weed from Skagway and a local Canadian beer. The rickshaw driver was brutally honest about the politics and life in that country. Regarding the political climate, he said, “If the US is Thor, Canada is Loki.” Once I let that settle in, I lost a little respect for our neighbors to the north. I entered the port through customs so I could get a Canada stamp in my passport. This wasn’t necessary for the cruise folks but it was necessary for me. (lol!)

Once done with Victoria, we did a straight shot back to San Francisco and was back earlier than expected. I think there was plenty time to have stayed in Victoria a few more hours, but that’s just my opinion. By the time it was all said and done, my spa treatments, the internet connection, the art and dress I bought not to mention the restaurants we went to that weren’t included*, the price of my cruise had doubled. (*The buffet and food available for free was very average. The best food on the ship was in the restaurants that weren’t included in the price and although they were cost effective, it still added up on my final bill. If you ever do cruise the Grand Princess, I highly recommend The Crown restaurant, just know it will cost a bit more, but it’s well worth it.)

Overall, the service was good. Most of the crew was from Italy. Most of the staff from the Philippines. I also met employees from Ireland, Russia, Mexico, Jamaica, and Brazil. As I got to know these fine employees, they explained they have contracts anywhere from 3-9 months. To me, their wages were very average to low, especially for the USA, which explains why there were no employees from my home country. Our specific cabin steward was so helpful, friendly and overall fantastic. A late twenties young man from the Philippines, he told me he worked nine months on the ship and then home for three months then back on the ship. His daughters are 4 and 6 years old and he proudly showed me pictures of them. He mentioned how he loved his job and the cruise line was good to him. It made me wonder what types of opportunities he would have if he stayed local to be with his kids and wife.

The entertainment was good too, and included in the price. We watched four movies that were all relatively new releases, a magic show, comedian, two variety shows with singing and dancing and an amazing woman who did impersonations. (She was my favorite.) There is  always something going on during the ‘at sea’ time.

As we lined up to disembark (ship talk, lol), I started to really pay attention to my fellow cruisers. Their bags were as full as mine, I’m sure many of them spent as much money as I did. There were 1,700 of us. Do the math. Do you really think it’s THAT expensive to operate the boat? Let’s say the average customer paid $3k, that’s OVER FIVE MILLION DOLLARS for ten days at sea. PLUS, the money they made on the souvenir shops and restaurants on the stops. It felt as if I was nourishing the corporations that I loathed. Yes, I had fun. Yes, I enjoyed my family’s company. Looking back however, for the money we paid, we could have done a five-star vacation on our terms, time and schedule. Which reminds me of a joke, a little ship humor.

A wife tells her husband, “Hurry and get dressed for our dinner at the captain’s table tonight, honey.”

The husband rolls his eyes and replies, “All this money we paid and we have to eat with the staff?”

I’m not saying don’t cruise, but don’t expect the eighties version of the Love Boat or you will be sorely disappointed. If you’re going to do the off-shore excursions, book directly through the company and not the cruise line, the locals make more money that way (and don’t forget to tip the guides). Shop local if you can, ask to be sure. Many stores, it’s obvious. Don’t be pressured to book their spa packages, as they are expensive and average, unless you really like spas. (Ok, my massage was better than average, but the rest of my services were very average, the mani/pedi lower than average, poor.) Look up free and inexpensive things to do during the stops, there are plenty. If only I had done more research before booking through Princess. (You know what they say about hindsight.)

My bucket list is almost complete now. I’m content that I did the Alaskan cruise, the company and weather were divine, but wish I had done things a bit different. Learn from my blunders and happy cruising.